Every six weeks, we partner with one of our amazing vendors to bring our guests unique and special food & drink items.  These specials run for 6 weeks and give us the opportunity to feature something from the menu as well as get outside the box.  For this promotion, we also have a contest with staff who submit recipes for drinks and food items.  5 finalists in each category make his/her drink or dish for a panel of judges made up of staff and vendor reps.

Our food winner with his delicious Chimichanga is Oscar Navarro from Maudie’s Milagro. 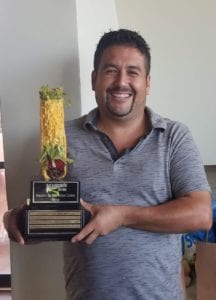 Our drink winner with an Avocado Skinny Margarita is Chris Tapia from Maudie’s Milagro. 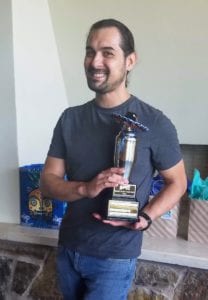 We truly love the creativity and inspiration behind all the participants’ drinks and dishes and hope our guests will enjoy the features that are currently available at your local neighborhood Maudie’s location!

While using your vast knowledge of traditional, Tex Mex cuisine is sure to impress any guest while also bestowing on them the privilege of enjoying the legendary Texan cuisine, it’s also beneficial to know for your own purposes. There may come a time when you need to educate an entire group of native Texans about what foods specifically are the crown jewels of the Tex-Mex recipes. This knowledge will arm you on those nights that you all want to go out to eat and someone suggests Tex-Mex, but then suggests a restaurant that lacks authenticity. Armed with your list of the best Tex-Mex cuisine, you’ll be able to challenge their points and steer the entire group toward a more advised option, like Maudie’s.

You may think that a bean is a bean, but it’s actually so much more than that. On a historical level, the ability to grow beans gave the peasant class access to protein which had previously been much more difficult to come by. It resulted in muscle growth and overall healthier commoners in medieval kingdoms and in rural areas all over the world. The fact that the cowboys and adventurers that founded our great state were able to do so with a tenacious spirit could be contributed to the protein in beans. Cowboys and travelers alike have managed to live on large pots of beans that gave them the vigor to survive harsh weathers and cut paths to help found of Texas. That being said, it should be no shock that refried beans are a crucial portion of a successful Tex-Mex meal. Since Tex-Mex cuisine remains the signature food of the state, a side of refried beans is basically required in a good Tex-Mex restaurant. The side dish is rich, creamy and earthy and is the taste of the Old West.

Even though this is Austin, and we’re better than San Antonio, they still have the puffy taco figured out. The puffy taco is made with fresh masa which is pressed into delicate little discs that are then fired quickly to produce the lovable, delicious puffs. The airy shell is meant to crack and shatter when you bite into it because it’s less about the sound of the crunch and more about the texture. They’re delicious and make the perfect addition to the main entree just for the unique mouthfeel.

Tex-Mex features many breakfast items for a couple of reasons: the ingredients mix well with the original breakfast combos and are great for hangovers. You don’t have a banana and coffee after an amazing night at South by Southwest, Austin’s premier music festival. Instead, you want a huge delicious burrito dripping with sauce and gooey cheese. There are a host of Tex-Mex landmarks in the breakfast industry that they often make it into the traditional Mexican restaurants. Even IHOP offers a smothered burrito, but that doesn’t mean you should get it. If you’re in need of an awesome way to get the day started, try out some huevos rancheros or head straight to the best Tex-Mex option with a breakfast taco. Breakfast tacos are much like everything else of the Tex-Mex variety in that they are a bunch of simplistic parts that come together to make something greater than themselves. Start with a tortilla and eggs and then it’s fair game from then on. It’s like an omelet, but so much better. Breakfast tacos take the cake for Austin as the New York Times claimed that we conquer the dish like no other place in the South.

If you’re enthralled by the idea of having some real Tex-Mex, whether you’re from out of town or local, stop by Maudie’s. We offer a variety of breakfast options like migas and chilaquiles for breakfast and traditional enchiladas alongside our legendary fajitas. Tex-Mex as a cuisine is rich in history and culture, but narrowing down the best items helps all of us understand what really matters. Which is, of course, who offers the best queso.  Stop on by and join the party fueled by an appreciation for the old west and the Texan culture that’s as unique and stunning as our burritos are.

Interested in sharing? Our catering options make it possible for you to provide the Texan culture to all of your loved ones once they’re gathered for your graduation party or anniversary. Get your order scheduled soon so your party is unforgettable.