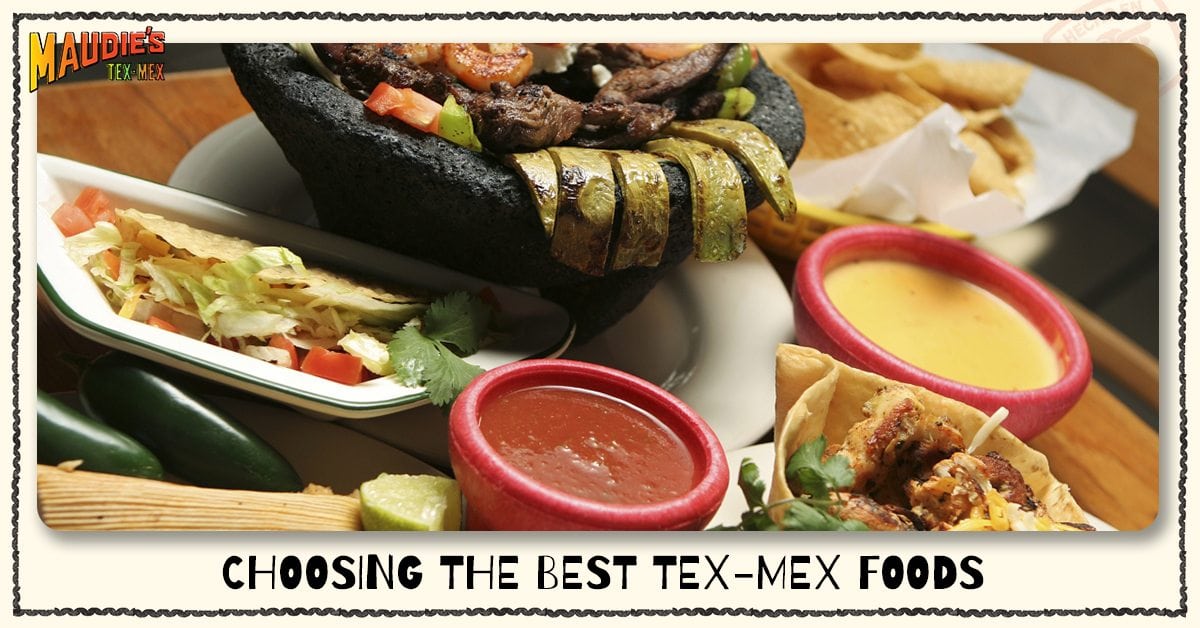 Tex-Mex is a beautifully tasty blend of so many different flavors that it’s easy to understand why people love it as much as we do. Each dish is a just-right blend of salty, sweet, bitter, sour, and savory flavors, which means that it will hit all the flavor points on your tongue and leave you feeling satisfied long after your plate is empty. Tex-Mex has roots in centuries of tradition in Mexico, as the name implies, but has grown and evolved with the influence of ingredients and other cultures’ cooking traditions, providing a uniquely Texan flavor as the dishes changed. To be honest, we don’t know why we’re bothering to tell you this—you probably already know. But, for those of you unfamiliar with the glorious flavors of Tex-Mex, here’s what you need to know about this unique Texan cuisine.

The difference between authentic Mexican food and Tex-Mex lies primarily in the ingredients. Some of the most common Tex-Mex ingredients are foods either not available in Mexico or hard to come by. Products like beef, cheese, cream, wheat flour, and even tomatoes were not staples of traditional Mexican food. When refugees from the Mexican Revolution fled north and began working on the ranches across Texas in the mid-1800s, these ingredients became available and ultimately shaped Tex-Mex into the cuisine we know today. So, whether you’re in Austin or Albany, if you see dishes like fajitas, taquitos, or burritos, odds are good you’re enjoying Tex-Mex rather than traditional Mexican food. If you’re ready to dive into one of the best cuisines out there, start with one of these Tex-Mex faves:

Who doesn’t love a good burrito? It’s spiced meat, beans, and condiments all rolled into a handy edible carrying case. Given how ubiquitous they are now, we bet you didn’t know the burrito is more Tex-Mex than traditionally Mexican! The historical Mexican version of the burrito is generally just a tortilla with beans and rice or cheese. Pretty simple stuff. It wasn’t until immigrants moved north into Texas that the burrito became more like the food we recognize today. Now, you can get your burrito stuffed to the gills with spiced meat, cheese, beans, rice, and salsa—and if you’re not taking it to-go, smothered in spicy sauce.

This is another Tex-Mex staple that started from a Mexican dish and evolved. An enchilada in Mexico is traditionally a corn tortilla wrapped around pork or chicken and smothered in a tomatillo sauce. As the dish moved north, more options were added, including the shredded or ground beef you’re probably familiar with. The other key addition: dairy. Moving into ranch lands meant cheese and cream were a good deal more accessible and incorporated into more foods. Today, you can enjoy just about any meat, cheese, and sauce combination you wish—for those who want to try it all, we suggest an enchilada platter with multiple varieties.

Unlike burritos and enchiladas, fajitas are a truly Tex-Mex innovation. When it was time to slaughter on the ranch, the vaqueros (cowboys or ranch hands) were often given the unwanted cuts of meat as part of their payment. Skirt steak, in particular, was considered a cheap cut of meat, but the vaqueros would grill it up and enjoy anyway. Wrap it in a flour tortilla, another Tex-Mex innovation, and add in some peppers and onions, and voila! A delicious dish from an unwanted cut. Today, fajitas are often cooked in a cast iron skillet to really imbue some great flavor. Top with some pico de gallo for a fresh and spicy bite, and enjoy this healthy and flavorful meal.

It’s no secret that frying food makes it more delicious. Human-kind has applied this cooking method to nearly every food under the sun, from kale to candy bars and even cola! For a Tex-Mex dish with taste and a good crunch, we suggest a chalupa. Beans, cheese, and meat all topped with guacamole or maybe some pico and served on an edible vessel: the fried tostada shell.

Who could forget this world-wide favorite? Tacos have legitimately been around longer than a great many countries, and for good reason! Today, enjoy this long-time favorite with nearly any topping combination you can imagine. Go simple with meat and salsa or go wild with grilled potatoes, fried or grilled fish, and even fried avocado. Add in a variety of salsas or smother with cheese and guac, depending on how healthy you want to be. When it comes to tacos, the world is your oyster.

There’s a whole world of Tex-Mex dishes to explore and enjoy. If you want to enjoy a true staple of Texas history, come to an institution that has been feeding the people of Austin for decades: Maudie’s Tex-Mex. Find the location nearest you and come enjoy the best Tex-Mex today!