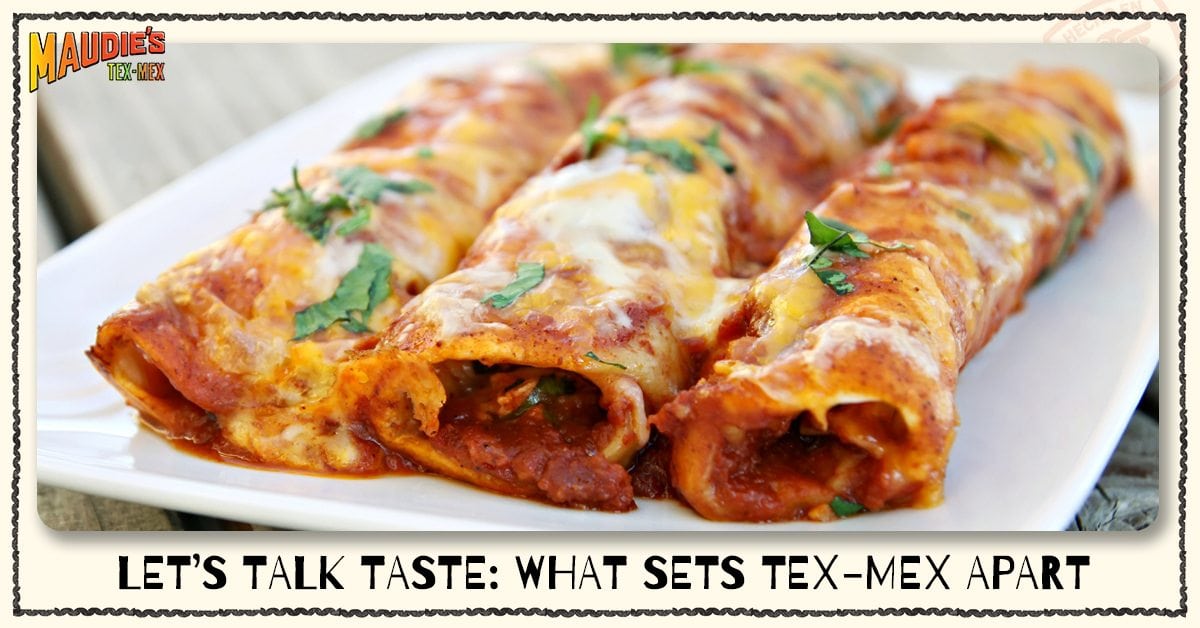 Here’s something you may not know: fajitas originated in Texas. That’s right, they aren’t a traditional Mexican food dish the way you expected; they’ve been a time-honored Texas tradition from the start! When you think about Texas history and the ingredients in a fajita, it all comes together pretty easily. When it was time to butcher, the less in-demand cuts, like skirt steak, were given to the ranch hands helping with the process. The meat was generally cooked over a campfire or on a grill. Over time, traditions and cultures melded, and families who grew up with this unpopular cut of meat started serving it with tortillas and traditional taco condiments like pico de gallo, guacamole, and grated cheese. The final jump from those makeshift tacos to the fajitas we know today happened at Ninfa’s, the Houston Tex-Mex institution. While people across the globe look at fajitas as a Mexican food staple, this dish is a darn good example of what sets Tex-Mex apart.

As an Austin Tex-Mex staple, we get this question a lot from out of town visitors. Most Texans born and raised with our special cuisine know it’s different—even if they can’t articulate why—but locals and those native to the country to our south will both tell you that Tex-Mex is distinctly not the same as the cuisine native to Mexico. The answer, as it so often is, lies in our history. The history of the fajita that we explained above is a good example of what we mean by this. Fajitas are an amalgam of spreading Mexican culture, the way of life, and foods available, and the point at which all of those intersect. In the case of fajitas, what we call a traditional food now is actually a combination of the cattle ranching lifestyle plus spices and flavors from Mexican cuisine. This same idea holds true for nearly all Tex-Mex dishes and is the primary reason why Tex-Mex is so different from true Mexican food.

Tex-Mex as a whole takes a lot of the sauces and flavors that came from Mexico and spread north with ranchers and immigrants, even before Texas became a country, or later, a state. One of the more overarching differences between Mexican food and Tex-Mex is the protein used. In many rural parts of Mexico especially, beef was harder to come by, whereas pigs and chickens were easier to raise. Because of this, an enchilada in the traditional Mexican sense would be pork or chicken spiced and wrapped in a corn tortilla and smothered in a sauce made from tomatillos and/or chiles. Because of the prevalence of cattle ranching in Texas, not only was beef easier to come by, even for the lower class, but so were dairy-based products like cream and cheese. Over time, a Tex-Mex enchilada evolved to be a mole-inspired chile con carne filling or cheese and chiles, corn tortillas, and a creamy sauce.

The Spread of Culture

Interestingly enough, many of the foods that Americans regularly see on Mexican restaurant menus across the country aren’t truly Mexican dishes at all; they’re Tex-Mex dishes that evolved and spread as our state and country have grown. Whether you grew up with Tex-Mex or not, you’ve likely been eating it. Examples of Tex-Mex foods include burritos and chili con carne as well as the fajitas and enchilada differences we talked about above. Want to tell whether it’s Mexican or Tex-Mex? The answer, as you can probably guess, is in the ingredients. Beef, yellow cheese, flour tortillas, canned veggies like tomatoes, black beans, and the spice cumin are all things most Americans would consider integral components to Mexican food. Ask for those in Mexico, and odds are good you’ll be given an odd look. Aside from beef, which was more prevalent in Texas because of our history as ranchers, the other key difference is wheat flour. Anything made with a flour tortilla? Yep, it’s probably Tex-Mex. And that creamy, gooey queso you love on nachos? Check and check. Definitely Tex-Mex.

If you want to experience Tex-Mex the most authentic way, it’s time to come to an Austin institution. Maudie’s Tex-Mex has been feeding the people of Austin since the 1950s. Find the Maudie’s nearest you and come see us today!